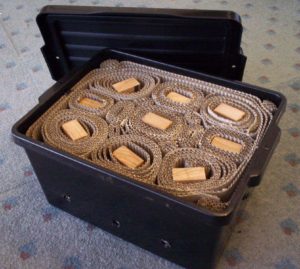 The use of termite bait boxes in Australia has become a tried and tested method of termite monitoring and control. Superior Pest Management has incorporated various termite baits into a simple, yet professional ready-to-use termite bait box. The Superior Termite Bait Box works particularly well when used in conjunction with both Exterra and Sentricon baiting systems.

What do I do once it's installed?

Your Superior Termite Bait Box is installed by a professional technician in a carefully chosen location. To know if termites are entering the box you must inspect it regularly. To familiarise yourself with the box, inspect it in the next couple of days, before any changes occur. You will see that the box contains cardboard and timber strips, laid out in a uniform manner.

When termites enter the box they will need to make some changes to the inside of the box. Some of these changes are to ensure a constant high humidity and temperature is maintained within the box. The termites may introduce a mudding material to achieve this temperature control. You may also see the termites themselves. They will be busily setting up their new house and won’t be too bothered with you as long as you don’t disturb them. Replace the lid quickly so the temperature in the box doesn’t go down. (If this occurs, the termites may vacate the box). If you do find termites, your job is done. Call us and we will be out to assess the box and make a decision when we will introduce Superior Termite Bait into the termite workings.

Termite bait is applied in boxes only where termites are feeding.
Important: A Superior Termite Bait Box does not keep termites out of your property. It helps manage your termite problem by eliminating termite colonies over time. Time to Feeding Variations exist in the amount of termite activity and number of termite colonies around different structures. For this reason, there is no defined period of time after the date of installation within which it can be guaranteed that termite feeding will commence in the Box. Establishment of feeding in boxes can occur in as little as one week, but may take considerably longer. In some cases it may take many months. Only then is bait added.

Time for Colony Elimination The colony may usually be eliminated within two to six months of commencement of feeding on the termite bait. However it may take longer*. For this reason, there is no defined period of time within which it is guaranteed that the colony will be eliminated. Multiple termite colonies are sometimes present in the vicinity of a structure. In order to protect your property against termite attack, all the colonies must be eliminated.

Factors that affect the period of time to achieve colony elimination include:
i) The presence of toxic chemicals from previous treatments. If you know of the use of termite chemicals around your property you should advise us.
ii) The size of the termite colony. Larger colonies may take longer to eliminate.
iii) The species of termites involved. With some termite species, eg Schedorhinotermes spp, moulting does not occur during winter and colony elimination will not occur until temperatures rise.
iv) The time of year. The time taken to achieve colony elimination is quicker during the summer months and slower during winter months.
v) The distance between your property and the termite colony.

Aggregation / Baiting – What is it?

A single application of chemicals can no longer be considered an adequate approach to termite control. Pest controllers and scientists are working to provide an integrated strategy that includes physical preventative measures and safer approaches to chemical treatment. The methods used are most effective if they are backed up by regular inspections by suitably qualified operators who can advise on individual needs.

Colony destruction. Most methods used to cure an infestation of termites in existing buildings involve colony destruction, but if a chemical barrier has been breached, it is important that it is restored or an alternative barrier considered. If nests can be located they can be destroyed directly, mounds can be dug out and the termites treated with a short-lived insecticide. Nests in tree trunks can also be treated with insecticides such as Intrigue® or arsenic trioxide dust, synthetic pyrethroids, or organophosphates. When it is difficult to locate the nest or the nest is within the building, aggregation/baiting techniques can be used.

The bait box technique for termite control was developed by Dr. John French at the CSIRO Division of Forest Products. It rapidly gained acceptance as the home-owners preferred response when termite damage is found because only small volumes of chemicals are used and the overall lower cost factor.

The box is roughly 350x300x200 mm with holes in the case and fitted with a lid to exclude light. The box is filled with material attractive to termites. Bait boxes can be used inside, under or around buildings. The purpose of the bait box is to rapidly establish a large feeding group of termites. Once sufficient termites are recruited, they may be fed bait that acts very slowly. The termites themselves become the delivery system, carrying the bait back to all other members of the colony. Termites share food, feed their young regularly, regularly groom one another and often cannibalise their dead. Bait that acts very slowly will ideally be spread throughout the entire colony, ensuring that all the termites will die.

Termite colonies are often traced to infested trees. The bait container can also be used in these areas. Whether inside or outside a building, the single most important factor in using bait methods is to locate the foraging termites.

Advantages of the aggregation box

A few grams of termite bait is used to kill the termites.
Baits are much more environmentally friendly and much less dangerous to human health than many traditional termiticides. The aggregation/bait box method targets only termites and will not harm other organisms. The aggregation/bait box method is cheaper than conventional methods of termite control. Once termites have been found, the decision must be made where to place your box. A good guide is to get as near as possible to undisturbed termite workings, either on soil or heavily damaged timber. Thoroughly moisten the bait material with water (dip and shake before assembling the battens and cardboard), also moisten around the box. Termites need water and will explore and feed more rapidly if they don't have to bring their own. The box should be buried with soil to about half its depth. This ensures that it will remain moist and will not change temperature too quickly. If placing boxes outside, shading them from direct sunlight may be advisable in the summer months. Cover it with dark plastic or underneath the shade to exclude light and limit evaporation.

Inspect your boxes about two weeks after installation. But don't be discouraged if nothing is seen for some time. If no termites are found in the boxes, remoisten the earth around the box with normal temperature water, but don't disturb the box too much. If the paper is spotted or eaten there are probably sufficient termites present for baiting. If you leave the box too long between inspections termites may eat all the food and then abandon it. It is important to call us as soon as termites are located so we can commence the baiting program.